Both the Home Theater PC made from recycled parts and Holly's desktop have suffered power supply failures. Both computers comprised of at least some parts dating back a decade. We have therefore decided to scrap them. 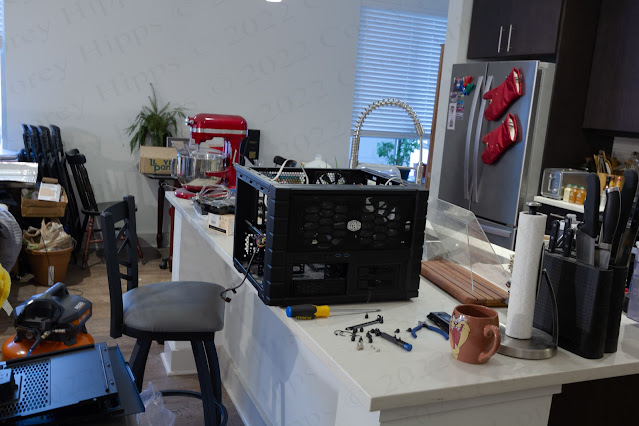 First, we attempted to find people who could use them, especially since January was peak component shortage. Then we found a place we plan to recycle them. We found Recycle Computers 4 Cancer and plan to donate the components there.

Holly's desktop, which has been around since circa 2012, finally had the nearly 10 year old PSU die on it. Rather than attempting a repair we decided it was time for something completely new. She got my old Fractal Design Define R6 USB-C and I got a new Corsair 7000D Airflow and did a transplant. 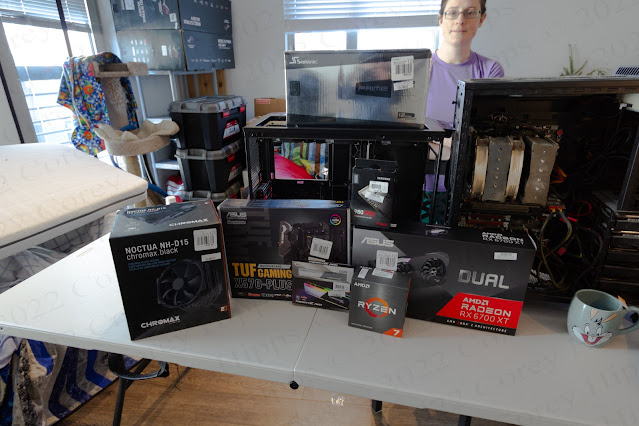 About a year ago I replaced my main desktop and posted the build. I am a big fan of building in the Fractal Design Define R6 USB-C Tempered Glass and if Microcenter had one of the mesh front panel variants in stock when we went to buy parts for Holly's new desktop, I would have gotten one in a heartbeat. 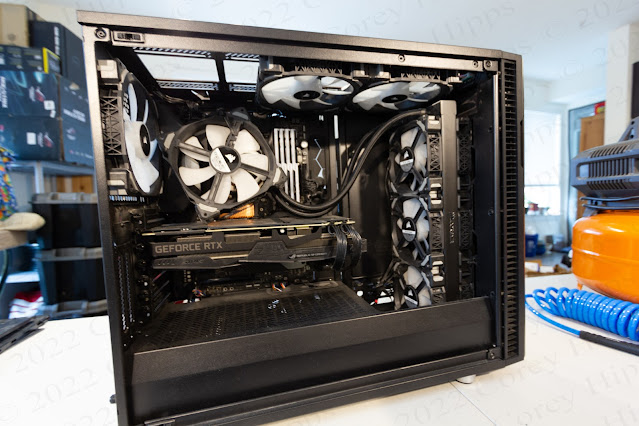 The problem is, with the solid front, the Define R6 just does not pull enough air through the front to feed the radiator and cool my AMD Ryzen 9 3950X 16 Cores 3500 MHz AM4 105W. 16 cores is just a lot of CPU. This is especially true in the summer in our current apartment. While we have central air the room we use as an office apparently has the worst air circulation of them all. Oops.

Holly needed to remove a the band on her Garmin Forerunner 945, the old band was really beat up and she wanted to replace it with a swap-able one. After years of seeing YouTubers we watch use iFixit branded kits we finally decided it may be worth getting a set both for the watch and some of the electronics and computer work we do from time to time. 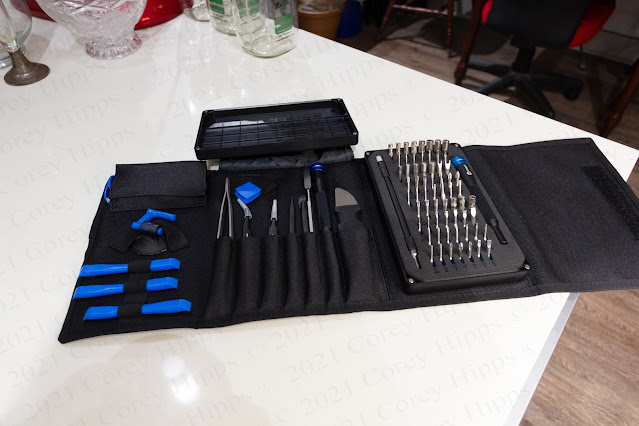 We bought the following items from iFixit: the Pro Tech Toolkit, a second Precision 4 mm Screwdriver Bit Torx Security TR6, and a second Precision Bit Driver, Aluminum. The watch band needs two of the torx bits and since there are two of us we wanted to drivers.

In January of 2021 Holly and I finally setup a combined storage system. The system started with 16 GB of ECC UDIMM RAM (2x 8 GB sticks). 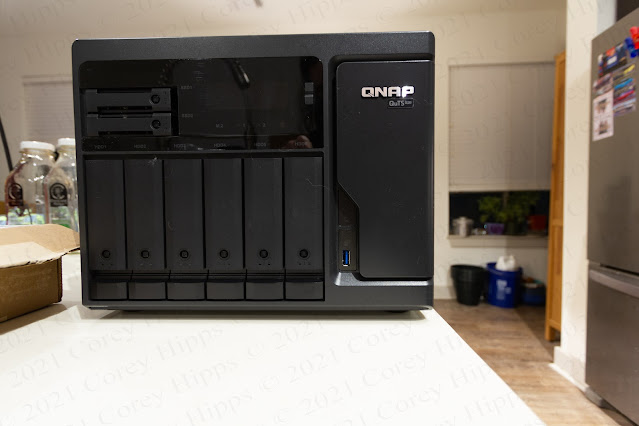 Getting the RAM was a bit interesting.

Holly and I have been married since August 2014. But we have not yet had a chance to set up a central storage location. We finally did so! Or as Holly has been putting it: "We're finally married!" 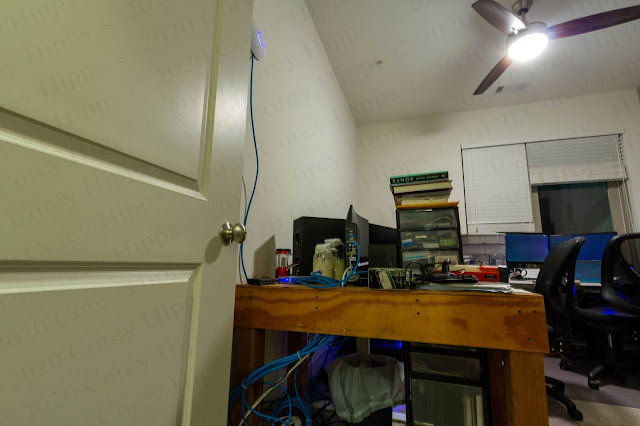 For Thanksgiving this year we went and visited my parents. They are under two hours away and part of our bubble during the COVID-19 pandemic. They recently bought a new house and I helped my dad to configure his woodworking shop. 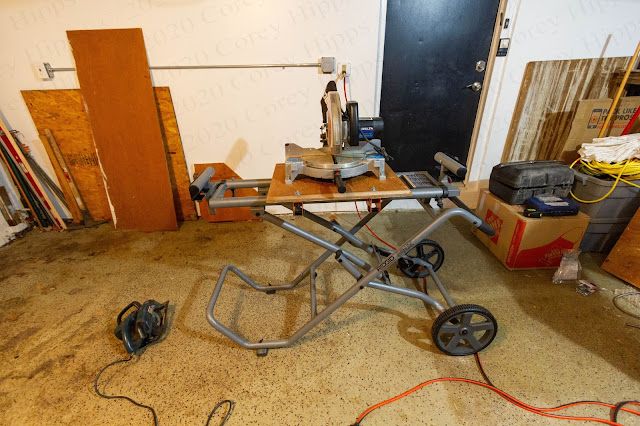 Due to space constraints the miter saw and saw table are staying in the garage while other tools are expected to end up in a work shop. Unfortunately the workshop does not have enough space for the saw table and the larger lumber.
Read more »
Posted by CBHipps at 4:00 PM No comments:

Having not built a new desktop since January 2012 it was time to build a new system. The old rig was last updated in September 2016 when its decade old power supply died.
This is my most complicated build to date, in some ways. It has seven RGB fans. It is also simpler in others, as current cases are much easier to manage wiring than prior cases. 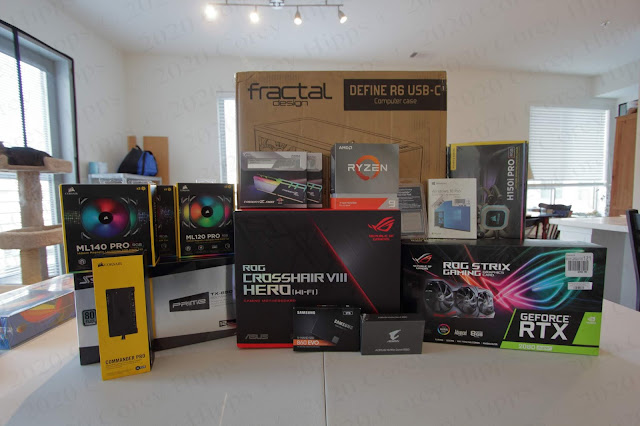 Shot of all the boxed parts prior to assembly, as this is the current way.

Cleaning Out the Storage Unit - Part 2

Our last trip to empty our self storage unit. At this point all that was there were some items going to my parents (tools, shelves, a microwave) and a bunch of car parts for Nausicaa, the 1993 Honda Prelude project. We moved with a Penske Ford F-350 16' rental truck.
It did not take us all that long to empty the unit and fill our oversize truck. 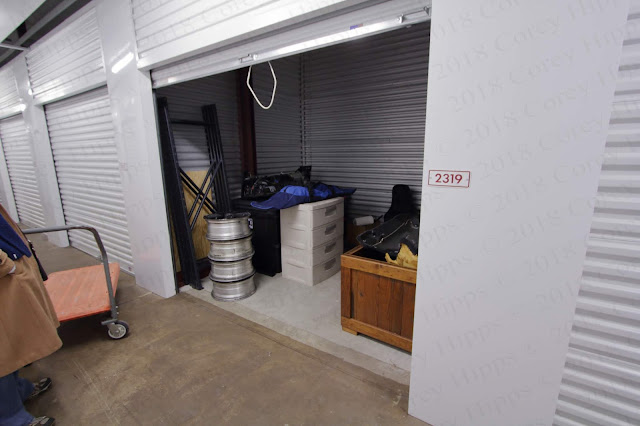 We are happy to be done with storage units.

Email ThisBlogThis!Share to TwitterShare to FacebookShare to Pinterest
Labels: Self Storage, Storage

This End Up, Classic Queen Platform Bed - Update and Improvements

We emptied out our storage unit of everything coming to Boston. One of the items we brought, that we have not had with us for two years, is our This End Up Classic Queen Platform Bed (my posts about the bed). When we went to reassemble the bed we found that the brackets for holding up the sides were rusted. We took a trip to Home Depot and looked for brass brackets as replacements but could not find what we wanted. Instead we wound up with brushes to remove the rust and paint to cover the brackets.
For brushes we used HDX Assorted Mini Brushes (3-Pack) and for paint we used Rust-Oleum Professional High Performance Enamel Gloss Black Spray Paint. I also used Permatex Fast Orange Fine Pumice Lotion Hand Cleaner as a lubricant with the brush and to help clean off the rust.
Here are some of the rusted brackets next to some of the cleaned brackets. 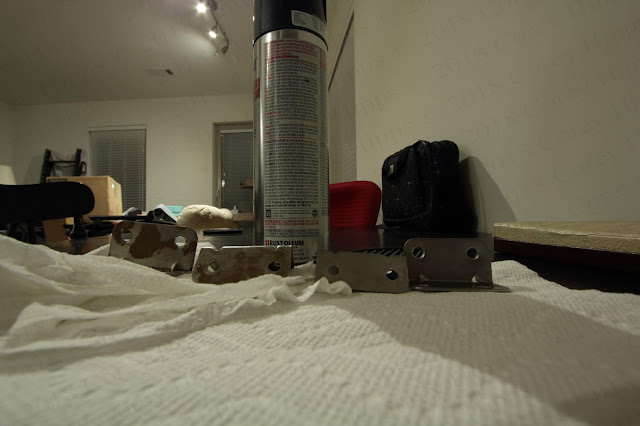